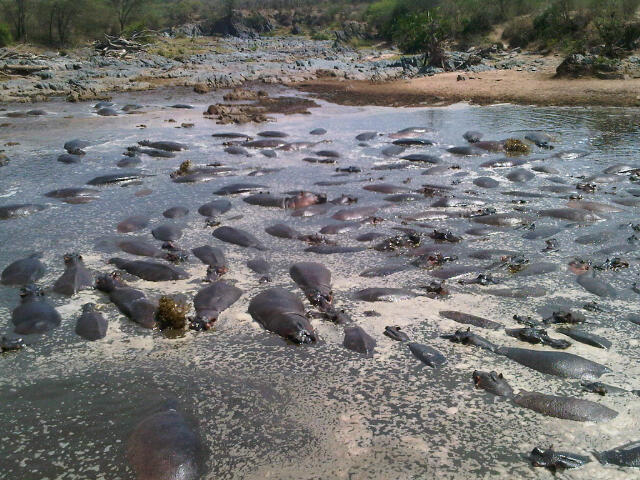 Check it out. A hundred or so hippos seeking relief from the Serengeti sun in a muddy pool. Tails flicking and splashing, honking on the off beat, a barrel roll here and there – it was mesmerizing. Seeing hippos was one of the things I was looking forward to most, and it didn’t disappoint. They are just massive and yet they have a certain grace.

We started the day with a dawn drive, but we came up empty. A certain animal fatigue sets in. Where on the first day every elephant and giraffe merited a stop and a photo, after a few days no one comments on or points them out. I took a couple of hundred photos on the first day using the digital SLR camera with invaluable telephoto lens I borrowed from a friend (thanks, Tom!), and I was worried I was going to run out of memory at the rate I was going. You soon realize there are only so many elephant photos you need. Ok, there’s one in the bushes as opposed to the plain, that’s a really cute calf, look at the size of the horns on that one, and… you’re done. So when you get a 6 am start to the day, you’re hoping to see something new or different. Eyes sweeping the ground, you’re on the look out for shadows, changes in color, or a flicker of movement. Is that a lion? No, it’s a tan rock. What’s that over there? A stump of a tree. Get the binocs, that might be a rhino at the treeline! Nope, buffalo. Of course he’s the guide and has been doing this for years but it was impressive the things Arib spotted that we would have driven by if we’d been on our own. We spent so many hours driving around that, in fact, a good amount of time we’d just sit and read and wait until he pointed something out. We scored in the afternoon. Once you’ve gotten past the standard set of animals, you hope to see something more exotic. We teased Arib, “Leopard today, right?” It was pretty unlikely, but, boom, there it was. Up in a tree. Taking a (cat)nap. We left the Serengeti and it was a long drive to the Rhino Lodge next to the Ngorongoro crater. It was pretty basic, almost like military housing, but they served a good dinner. Tanzanian food isn’t that exciting. At breakfast, there will be hot dogs. At dinner, count on beef with gravy. They don’t know how to cook potatoes or they just like them super dry and bland. But Tanzanians make mighty fine soups. There is always soup at dinner, and several soups I had were best in class. Parsley soup, carrot soup, cucumber soup – all perfectly seasoned and with sumptuous flavor. I always had seconds and could have made my meal of soup alone. I told our cook the first couple nights that he should make a soup cookbook.